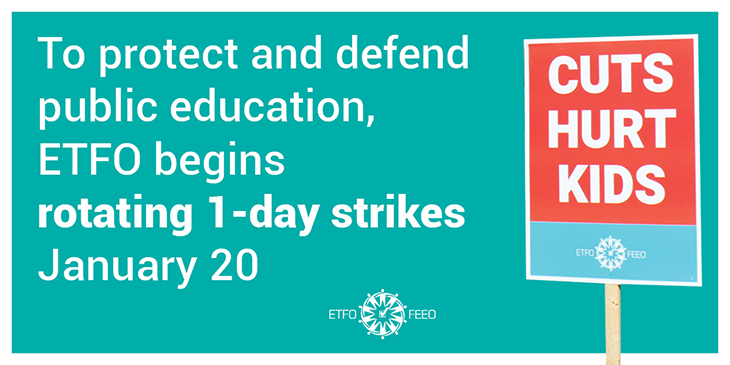 The Elementary Teachers’ Federation of Ontario (ETFO) has given the required five-day notice for Toronto, York Region and Ottawa-Carleton school boards in anticipation of a one-day strike on Monday January 20th. Unless government representatives get serious about reaching a deal by this Friday, ETFO will commence rotating strikes next week.

“Other than cuts to education, Ford’s Education Minister Stephen Lecce has refused to give his negotiators a mandate to discuss the substantive issues we know are important for students and education workers,” said ETFO President Sam Hammond. “Unless the government makes an immediate effort to engage in serious talks, we will have no option but to further escalate our strike action. As of today, Minister Lecce has established no dates for contract talks.”

“What we and parents are fighting for today will have an impact on the education of generations of students to come. At this time, our only tool to put pressure on the government to bargain seriously for the future of education is to withdraw services as part of strike action,” added Hammond.

If taken, this legal strike action will be part of rotating strikes by ETFO teacher, occasional teacher, designated early childhood educators, professional support personnel and education support personnel locals. In November, 98% of ETFO members gave their union a strong mandate for central strike action should it be needed during ETFO’s central bargaining negotiations. Collective agreements for all ETFO members expired on August 31, 2019.