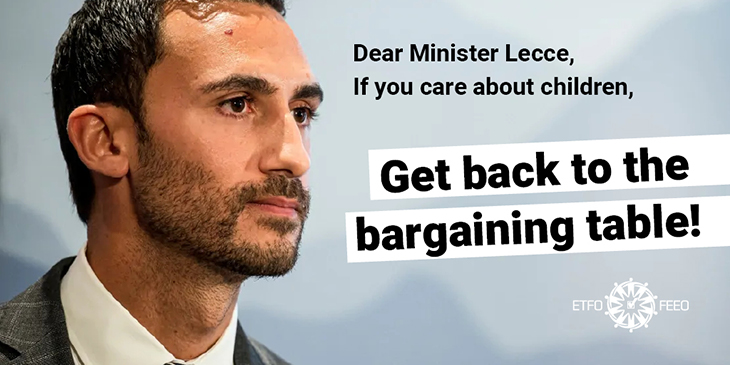 The following ETFO Media Release was posted on January 15, 2020.

Ford’s Education Minister Lecce needs to put investment into public education rather than attempt to bribe parents with their own tax dollars during labour action by education unions, according to the Elementary Teachers’ Federation of Ontario (ETFO).

“This is a transparent attempt to bribe the public to support the government. Doug Ford’s Education Minister is trying to cover up the fact that this government is making massive cuts to public education and wants more cuts to elementary education at the bargaining table.” said ETFO President Sam Hammond.

“For months, Minister Lecce has given his negotiators no mandate to address any key issues like class size, protection of the Kindergarten program and funding for special education. We understand the hardship that strike action creates for parents and that some will feel the financial pinch. We are asking that parents continue to stand with educators as we defend our children’s education now and in the future.”

“A responsible Education Minister would put this money into public education funding as part of contract talks. These funds could be providing the $50-$80 million that ETFO has proposed to support students with special needs for special education,” added Hammond.

“Having set no dates for contract talks since December 19, it is obvious that Ford and Education Minister Lecce have no intention of reaching a deal that addresses serious issues for students, student learning and educators. The actions of this government during the whole bargaining process suggest that its goal is to gut public education funding and punish educators that have helped make Ontario’s public education system one of the best in the world.”

“This is the first time in over 20 years that all four education unions have moved into a legal strike position. The common denominator is a government that is trying to gut funding for public education, while working in secret to privatize and monetize Ontario’s public education system.”