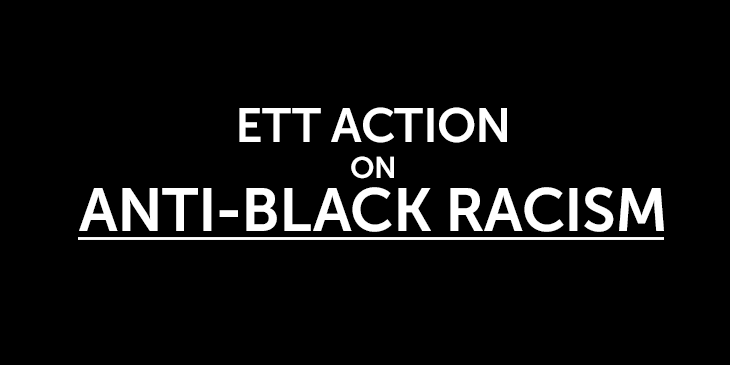 As we watched in anguish this past week to the reactions of domestic and world leaders to the outcry, mass rallies, and collective anger taking the form of peaceful protests, we are shaken, in mourning, and in grief.

We know that silence equals death, which is why ETT and ETFO, together, in chorus with our labour, social justice, and community allies, stand in solidarity, with our shared sorrow and outrage, as we denounce:

As educators and unionists, we have a unique and essential responsibility in standing with Black Lives Matter to fight against and dismantle anti-Black racism in our communities.

Furthermore, we must acknowledge the trauma experienced by Black educators, parents, and students and pledge to continue to find ways to care for each other and show our active allyship.

The history of police brutality, murder, and anti-Black racism is as long as it is horrifying in this country. We are stunned that a Premier would ever dare to insist that systemic anti-Black racism is not an issue in Canada. This analysis and proclamation is ignorant, appalling, and abhorrent, and such a denial must be called out and addressed head-on, en masse, in volume, and in scaffolded and strategic action.

June is Pride Month. As we take action, it is important to recognize, especially as we approach the 4th anniversary of the Pulse Nightclub Shooting on June 12, the origins of Pride as a protest and revolution against the powers of oppression. The violence in our society against Black, Latinx, Indigenous, and other people of colour, as well as Queer and Trans people, stems from the same institutional injustice, prejudice, racism, and white privilege. As educators, it is essential that we reckon with this and hold our schools boards, governments, and ourselves to account as we look towards building a just, anti-racist society.

Please review and share the ETFO recommended actions and resources on anti-Black racism, lesson plans on recognizing white privilege, and Pride materials. Members are also encouraged to read and share the Toronto & York Region Labour Council’s Equity Committee Submission to the Hearings for an Anti-Racism Directorate, of which ETT has contributed.