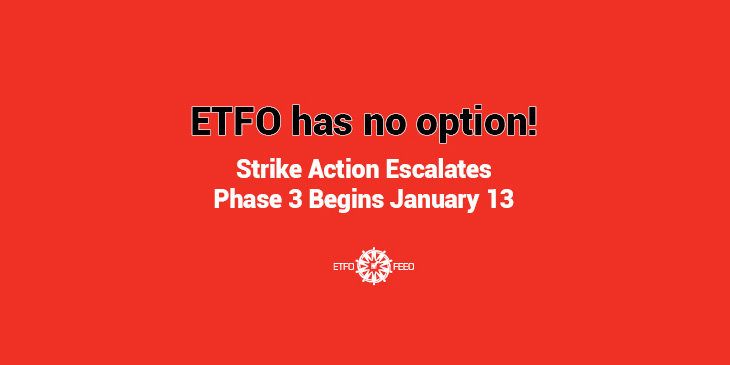 The following ETFO Media Release was posted on January 9, 2020.

Faced with a government that continues to demand cuts to elementary education and refuses to address key issues affecting students and educators, the Elementary Teachers’ Federation of Ontario (ETFO) is escalating its strike action.

Starting Monday, January 13, 2020, public elementary school educators will no longer supervise extra-curricular activities nor will they participate in field trips. If the government refuses to address critical issues in talks by January 17, ETFO members will commence a full withdrawal of services strike on a rotating basis beginning January 20th.

“In six months of contract talks, the Ford government’s education minister has given his negotiators no mandate to discuss anything other than cuts to education including a $150 million cut to public elementary education,” said ETFO President Sam Hammond. “That’s why there has been negligible progress on substantive issues like supports for Special Education, protecting the Kindergarten model, addressing classroom-based violence and compensation that keeps up with the cost of inflation.”

“This government’s approach to education sector contract talks is a sham. The government representatives have confirmed that they have no mandate to negotiate issues beyond cuts. They have met with ETFO for a very limited time on each of the 22 days of bargaining since August making it obvious that there is no intention or ability for them to address serious issues affecting the education of elementary students and educators.”

“Elementary educators have a responsibility to stand up to this government. Educators are very aware that what we are fighting for today will have an impact on generations of students to come,” added Hammond.

“Contract talks are not being helped by Ford’s Education Minister Stephen Lecce making public announcements that misrepresent what his team is doing at the bargaining table. The disconnect is so great that we’re left shaking our heads. Minister Lecce claims in public that there will be no changes to the Kindergarten model, but refuses to make that commitment during bargaining. The Minister claims salary is the main sticking point in bargaining, yet it’s been a topic that has received hardly any discussion over months of bargaining.”