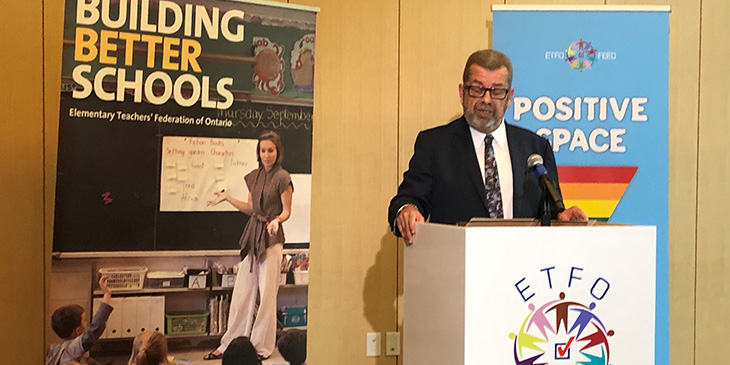 ETFO Media Release: Ford Government Must Get Back to the Bargaining Table and Negotiate Deals That are Good for Students, Educators, and Public education

The following ETFO Media Release was posted on February 24, 2020.

The Elementary Teachers’ Federation of Ontario (ETFO) is urging the Ford government and its Minister of Education, Stephen Lecce, to get back to the bargaining table so agreements can be reached that are good for students, educators and public education by Friday, March 6, 2020.

“ETFO begins its Phase 6 Strike Protocol on Wednesday, February 26,” said ETFO President Sam Hammond. “That means our members will remain in schools and will follow their teaching, student supervision and preparation time schedules, as well as other scheduled duties. They will not fill in for absences that should be covered by occasional teachers and education workers, or upload data related to assessments. In addition, ETFO members will not be using their personal funds to pay for classroom and education-related expenses.”

“During this phase of strike action, ETFO wants to highlight a long-standing concern, which is that teachers and educators have been filling in education funding gaps themselves by paying for classroom basics – books, paper, art supplies, technology, furniture and so on – out of their own pockets,” said President Hammond. “These are items that should be covered by the Ministry of Education and school boards, but aren’t.”

“Using their own money to ensure their students have what they need to learn is just another example of the lengths our members will go to support Ontario’s public education system,” noted Hammond. “Unfortunately, this government’s inclination is quite different. It’s determined to pull much-needed funding out of our schools and undermine an education system that is consistently ranked as one of the top performers in the world.”

As part of Phase 6 strike action, ETFO members will also be building on the overwhelming support they received on picket lines from parents, businesses and community partners by advocating around key education and bargaining issues at information pickets and online.

“ETFO is asking the government to get back to the bargaining table and negotiate an agreement by Friday, March 6,” said Hammond. “The Ford government has an opportunity to ensure stability in elementary schools. If the government ignores this opportunity and chooses labour disruption instead, ETFO will move to its Phase 7 Strike Protocol on Monday, March 9, 2020.”