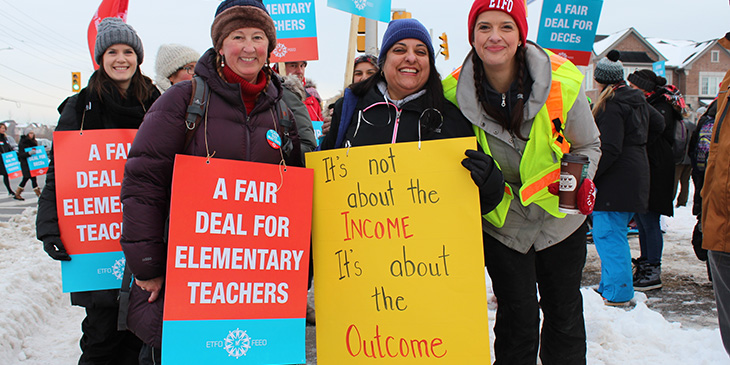 The following ETFO Media Release was posted on January 28, 2020.

This morning, Mediator, Denise Small, reached out to both the Elementary Teachers’ Federation of Ontario (ETFO) and the negotiating parties for the Ontario government and school boards to resume negotiations.

While ETFO is willing and committed to moving forward to resolve this ongoing labour dispute, the union’s President, Sam Hammond, is adamant that, “open exploratory talks with the Ford government’s negotiators must include a mandate to remove further cuts, increase supports for students with special needs, preserve the current Kindergarten model with a teacher and designated early childhood educator, and maintain fair and transparent hiring practices.”

ETFO has agreed to return to the table tomorrow, Wednesday, January 29, 2020, to pursue open dialogue towards reaching a fair central agreement for 83,000 elementary educators and education professionals. In agreeing to return to the table, ETFO is optimistic that the government’s representatives will engage in meaningful bargaining around key issues.

Hammond added, “It’s time that the Ford government recognized that our public education system is key to the future of this province’s economy. We must have the tools and supports to prepare students to realize their individual aspirations and productively contribute to the economic and social fabric of this province.”

TDSB Closing Schools Until April 5 in Response to COVID-19 Pandemic.