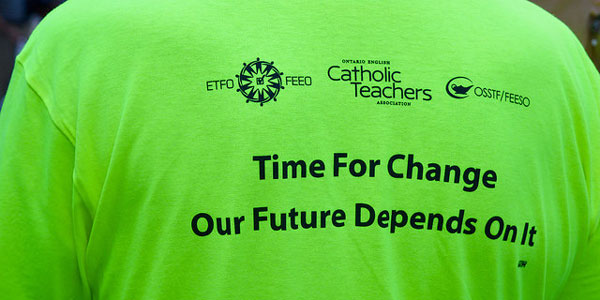 On Monday, September 7, 2015, ETT members marched in solidarity with thousands of workers, students, and colleagues from other labour locals in Toronto’s 2015 Labour Day Parade.

“Attendance at the parade was outstanding and workers marched in solidarity with one another,” said Felicia Samuel, ETT Executive Officer and Liaison to the Political Action committee. “ETT’s participation with our sisters and brothers in labour showed our commitment to the kind of government that cares about its citizens, and believes in, and looks after our youth. Our solidarity will ensure that we have a change in government on October 19,” she said.

There was a strong contingent of teachers at this year’s parade and ETT members took advantage of the opportunity to launch our Full-Day Kindergarten (FDK) campaign, an advocacy campaign to stand up for students and improve public education in Ontario.