Every public sector job in Ontario generates approximately 0.67 private sector jobs, which means that the Tories’s scheme would also cost the Ontario economy an additional 67,000 jobs. Such a dramatic loss of employment (approximately 2.1 per cent of all of the jobs in the province) would send the unemployment rate spiraling upwards to a historic 9.7 per cent, devastating Ontario’s families.

And the sector Hudak plans to hit hardest? Education.

“It will mean fewer teachers and their assistants,” says Hudak of his plan, further promising to increase class sizes, change staffing levels in full-day kindergarten classes, and deny elementary teachers salary parity (the 2% as per the MOU).

Not surprisingly, Ontarians aren’t buying Hudak’s numbers. In a poll by Forum Research, more than 60 per cent of Ontarians disapprove of Hudak’s plan to fire 100,000 workers, and a majority say that his job creation plan, or lack-thereof, is bogus.

Help us highlight Hudak’s faulty math by sharing the image below. Send the message that the Conservative’s policies are wrong for Ontario and wrong for our schools. 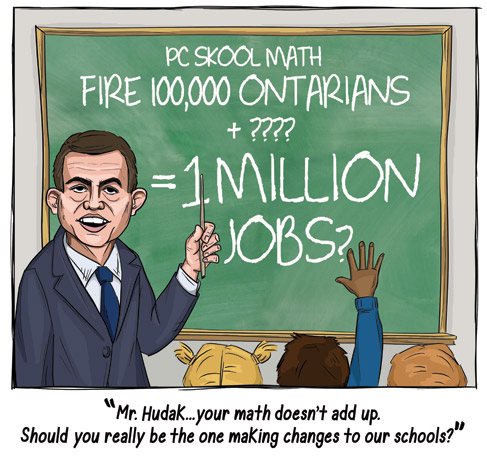 Visit the 2014 Provincial Election portal on the ETT website for election news, resources, and polling updates.