The following post is from an e-newsletter sent out by the Raise the Minimum Wage Campaign.

A day after the recommendations of the Minimum Wage Advisory Panel were released, there is speculation the Ontario government will increase the minimum wage to $11. While this increase would recognize that wages have been frozen for four years, it still locks Ontario workers 16% below the poverty line.

Instead of legislating a poverty wage, we are calling on Premier Kathleen Wynne to take leadership for good jobs and increased consumer spending by implementing a $14 minimum wage.

A powerful Toronto Star editorial today calls on Kathleen Wynne to do better than $11 and states “Wynne is certainly speaking to the business lobby when she refuses demands for a boost to a $14-an-hour wage.”

From registered nurses, to doctors, to economists–the response today is overwhelming, we need decent wages, not poverty wages. 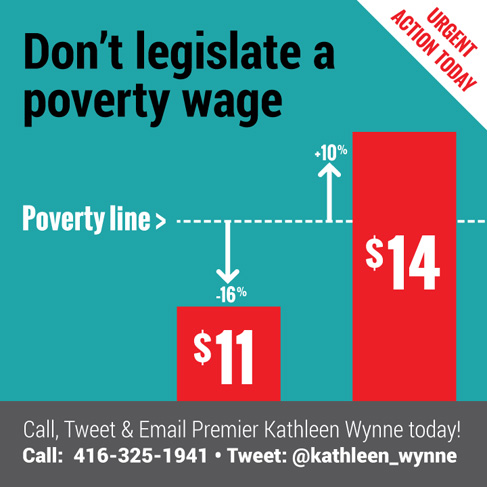 We need your support to send a strong message to Premier Kathleen Wynne today!