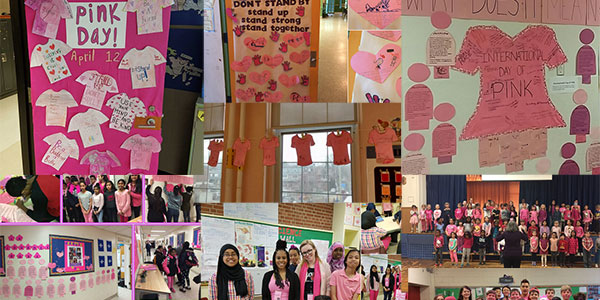 ETT is proud to announce the winners of our 2017 International Day of Pink Twitter Contest.

Between April 1 to 12, 2017, ETT members were invited to celebrate the Day of Pink by highlighting the anti-homophobia and anti-transphobia activities in their class, staff-room, and schoolyard.

The response we received was nothing short of amazing, with members from across the TDSB submitting fantastic artistic displays, classrooms bathed in pink, and students and staff taking part in a wide range of Day of Pink activities.

Thanks to all of the members that participated.

We stand up against bullying, homophobia and transphobia! Check out the final T-shirt designs. #ETTDayofPink @TDSB_HowardPS pic.twitter.com/pNES5puLtN

See all of the entries with the hashtag #ETTDayofPink.

About the International Day of Pink

The Day of Pink is an international day against bullying, discrimination, homophobia, transphobia, and transmisogyny. Each year, on the second Wednesday of April, millions of people around the world wear pink and go pink to take a stand.