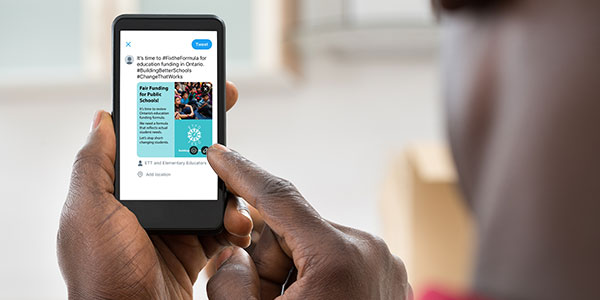 On Wednesday, May 30, 2018, ETT members from schools across the TDSB took part in ETFO’s virtual rally, sending a mass message across social media channels that Building Better Schools is a critical election issue.

Thank you to all of the ETT and ETFO members that participated in the virtual rally. Your creative photos and signs, and heartfelt and insightful messages were inspiring.

We would especially like to thank our Stewards for coordinating and leading the various member meetings and brainstorming sessions at individual schools. It’s your hard work that made this rally a success.

The following is a small selection of #BuildingBetterSchools tweets from ETT members. Thanks again to everyone that participated!

We are voting for Building Better Schools in this year’s provincial election! #buildingbetterschools #NDP pic.twitter.com/ic8EK5ZeCr

As a teacher my knowledge and experience help me identify student’s special needs; a frustrating curse when you can identify need but are forced to watch as those needs cannot be met effectively. Vote for #buildingbetterschools #changethatworks #OnElxn #onpoli #OntarioVotes pic.twitter.com/ui6LZZOqMT

Whatever your opinion, make sure it counts. Inform yourself and don’t forget to vote on June 7th. The staff are discussing what will help to build better schools. Obviously an issue that is important to all of us! #buildingbetterschools pic.twitter.com/ZFjs7GI5IO

#buildingbetterschools walk in our shoes for a day. We want better for our students pic.twitter.com/BM1S3naV2O