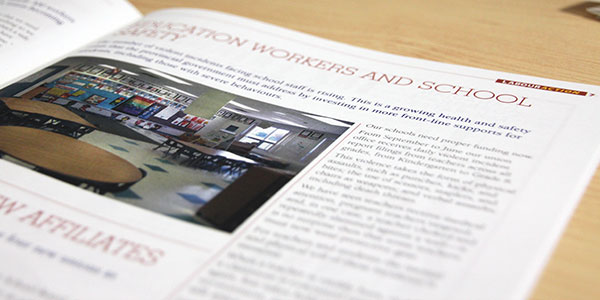 An article on the rising number of violent incidents in schools, from the perspective of our Health and Safety Coordinator, Terri Lynn Platt, is featured in the Fall 2017 edition of Labour Action magazine.

The piece highlights the year-over-year increase in violent incident report filings from ETT members and calls for the provincial government take action to address this growing crisis by investing more in “front-line supports for students, including those with severe behaviours.”

“For teachers and students the mental and physical toll of these incidents is immense,” says Platt. “When a teacher is visibly hurt, or when a classroom is evacuated time and again, fear takes hold in the learning environment, jeopardizing an essential safe space.”

Labour Action is a publication of the Toronto & York Region Labour Council.

Learn more about ETT and ETFO’s ongoing campaign to address violence in schools. 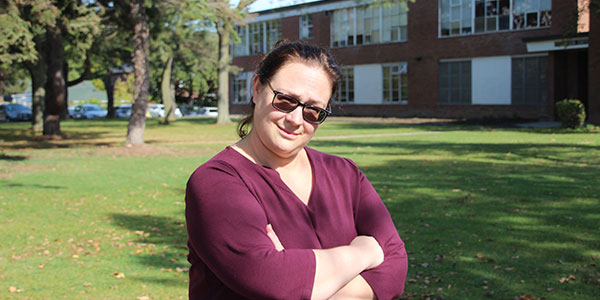 Government Needs to Act to Address Violence Against Teachers in Schools

The number of violent incidents facing school staff is rising. This is a growing health and safety crisis that the provincial government must address by investing in more front-line supports for students, including those with severe behaviours.

From September to June our union office receives daily violent incident report filings from teachers across all grades, from Kindergarten to Grade 8.

This violence takes the form of physical assaults, such as punches, kicks, and bites; the use of scissors, staplers, and chairs as weapons; and verbal assaults, including death threats.

We have seen teachers receive medical attention, pregnant teachers targeted, and, in one case, a teacher choked and repeatedly slammed against a wall—it is no surprise then that some teachers must now wear protective gear.

For teachers and students the mental and physical toll of these incidents is immense.

When a teacher is visibly hurt, or when a classroom is evacuated time and again, fear takes hold in the learning environment, jeopardizing an essential safe space.

Last year, more than 400 violent incident reports were filed, a number that has increased yearly—a disturbing trend that other education locals also report.

More troubling, these numbers are likely underreported, as education workers are often reluctant to speak-up and discouraged from reporting due to insufficient employer follow-up.

We need action. Our children are watching and experiencing this violence. Our schools deserve adequate funding for training, staffing, and programing resources to meet the needs of all students.

ETT In The Media, News, Violence in Schools