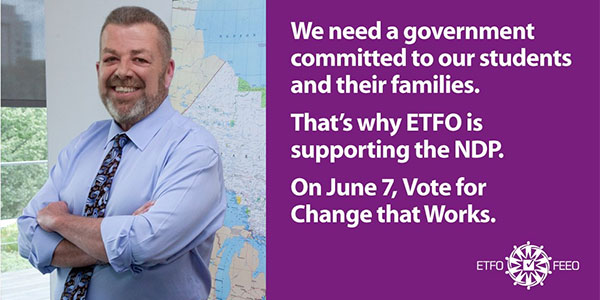 ETFO Media Release: Supporting the NDP and Change That Works For Majority of Ontarians

The following ETFO media release was issued on May 10, 2018.

With Ontario voters appearing overwhelmingly to believe it’s time for change, the Elementary Teachers’ Federation of Ontario (ETFO) is supporting change that works for people across the province promised by the New Democratic Party (NDP).

Ninety-eight ETFO local leaders from across the province heard first-hand from NDP leader Andrea Horwath today on measures the party will take to ensure that Ontario families get the services they need.

“It’s clear that Ontarians believe it’s time for change after 15 years of Liberal government,” said ETFO President Sam Hammond. “If Ontarians want change that is going to truly better their lives, it’s not through more corporate tax cuts and $6 billion in cuts to government services that the Doug Ford Conservatives are promising.”

“We need a government that has the courage to do what’s needed to make life affordable and provide better public services for the majority of Ontarians. Horwath’s NDP will reverse the deep corporate tax cuts for large corporations and bring in measures to ensure the wealthiest individuals are paying their fair share, something that the Wynne Liberals wouldn’t do.”

The NDP is promising to conduct a review of Ontario’s funding formula and end EQAO testing, invest in repairing crumbling schools and base special education funding on actual student needs. These are critical changes that ETFO and other education stakeholders have called for to improve the province’s education system.

“Ford’s commitment to cut $6 billion in government expenditure can only lead to serious cuts in education and other services. We’ve seen what happens when populists like Doug Ford rail against all forms of government. The wealthiest corporations and individuals benefit while average people lose the services they need to look after themselves and their families.”

“Educators see the effects of poverty and economic inequality on students and their families every day. Ontarians need decent work, a well-funded education system and better public services like pharmacare, dental care and child care to get ahead. Andrea Horwath’s NDP will move all of us forward.”