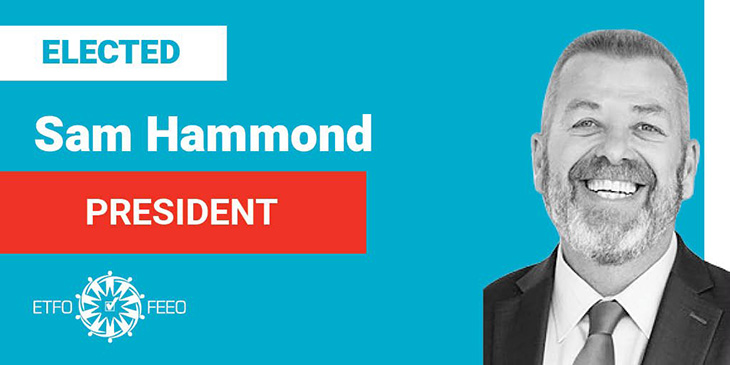 Sam Hammond has been acclaimed as President of the Elementary Teachers’ Federation of Ontario (ETFO). Hammond was first elected as President in 2009 and will now begin serving his sixth term in this position. His full biography is available on the ETFO website.

Sam Hammond was re-elected president of the Elementary Teachers’ Federation of Ontario (ETFO) at its Annual Meeting today for a sixth term. He has served as ETFO president since 2009.

“In just over a year, the Doug Ford Conservatives have created nothing but uncertainty and chaos in the public education system. Instead of fixing the education funding formula, he has made the deepest cuts to education funding in two decades,” Hammond told 800 ETFO delegates.

“Ford has attacked equity and inclusion in our schools, class size, the Full-Day Kindergarten program and fair hiring practices by school boards and caused the loss of thousands of teacher and education worker positions. In response, a massive grassroots movement of educators, students and community groups have united against this government’s policies”.

“The unrelenting attacks on unions, public services and on free collective bargaining have mobilized unions and working people across the province who understand that the Ford Conservatives are not governing in their best interests.”

“All this has strengthened my resolve as president to ensure that ETFO continues to lead in calling for investment in public education, a reversal of massive cuts and respect for our 83,000 members who are key to Ontario’s world-class education system,” added Hammond.

Hammond, who served as an ETFO vice-president from 2004-2007 and as first vice-president from 2007-2009, was first elected to the provincial Executive in 2003. Prior to that, he taught physical education and health from Junior Kindergarten through Grade 8 in Hamilton-Wentworth for well over a decade. He served the Hamilton-Wentworth Teacher Local as chief negotiator and grievance officer for five years.

Message From ETT President Joy Lachica: Defending Our Practice and Professional Judgement in Programming During the Closure