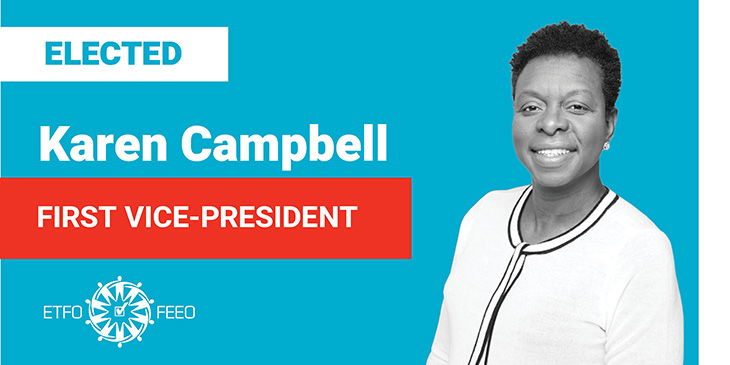 Karen Campbell, ETT member and former ETT Vice President and Executive Officer, has been re-elected as ETFO’s First Vice-President. Campbell was first elected to this position in 2017. She joined the Provincial Executive in 2009 and served as Vice-President from 2015-2017.

Speaking to over 800 members, Campbell said, “Given the false narratives of the Ford Conservative government, the time is now to reclaim the public education system we all treasure and protect the integrity of the teaching profession against misguided ideas like the proposed ‘Parents Bill of Rights.”

“We saw the power of mobilizing members and the public exhibited at the April 6 Rally for Education at Queen’s Park. ETFO will continue to help build resistance to the Ford government’s massive cuts to public education, class size increases and the privatization of public services.”

Karen began her teaching career with the Toronto District School Board in 1993. She is also a registered early childhood educator (RECE) and has extensive experience in the early years. In addition to serving as vice-president of the Elementary Teachers of Toronto from 2003 to 2012, she served as chief negotiator, grievance officer, benefits coordinator and strike team coordinator.

At the provincial level, Karen has served on the ETFO Executive since 2009. She has chaired and served on several Federation standing committees and task forces. Karen is a governor of the Ontario Teachers’ Federation and a member of the Coalition of Black Trade Unionists (CBTU). She is also a member of the Canadian Labour Congress Women’s Advisory Committee.