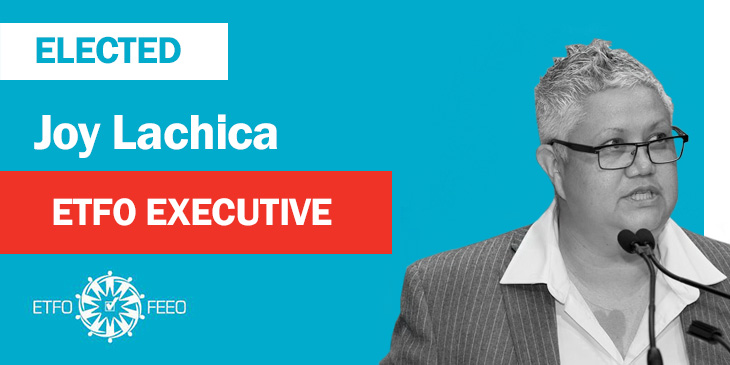 Joy Lachica, ETT President, has been re-elected as an ETFO Executive Member. Lachica was first elected to the Provincial Executive in 2017.

The following media release was posted on the ETFO website on August 15, 2019.

Speaking to more than 800 ETFO members at the Federation’s Annual Meeting, Lachica said, “We will not see our public education system, which has taken generations to evolve into a world-class system, destroyed by the Ford Conservative government.”

“Throughout this year, we have seen a movement taking root to push back against government cuts spanning locals, labour organizations, parents and community groups. We saw that at ETFO’s rally against the repeal of the 2015 Health and Physical Education Curriculum, the April 6 Queen’s Park Rally for Education and at many local rallies at MPP constituency offices.”

“I have also seen first-hand the negative effect of U.S. charter schools on the public education system, which has widened the economic chasm further. We cannot allow that to happen in Ontario,” added Lachica.

Joy began her teaching career in 1990 in Toronto. She served as regional director of the Huntington Learning Centre in New York City from 1999-2002 before resuming teaching positions with the Toronto District School Board in grades 7-8 and special education. In 2015, Joy was elected as a released officer with the Elementary Teachers of Toronto (ETT) and then as president in 2018. She has served as executive liaison to the LGBTQI and Environment committees and as a member of the ETT Negotiations Committee.

Joy has been a member of the provincial LGBTQ Standing Committee and is also co-chair of the Toronto and York Region District Labour Council’s Environmental Committee. In June 2019, Joy and ETT worked with parent communities to coordinate a parent/teacher/student “Walk-In” for Education Action at over 300 schools in Toronto and beyond.