In 2003, when former Premier Dalton McGuinty and the Ontario Liberal Party swept into office, it was largely on the heels of a flailing Harris/Eves government mired in self-created, fictional crises (especially in the education sector). It’s no small irony then that a manufactured crisis dominated this academic year, a crisis that didn’t exist and could have been avoided.

The old saying, “those who don’t know history, are destined to repeat it” bears remembering as the truism holds, “history does repeat itself.”

Ten years later, the Liberals have devolved into neo-liberals, and the Progressive Conservatives into regressive conservatives. Together, in concert, on September 11, 2012, they passed Bill 115, with the Orwellian sub-title: the “Putting Students First Act” (though it’s hard to put students first if you put teachers last).

This strange partnership took a bigger swipe at education than the previous Harris regime, with attacks on basic bargaining rights; unilateral changes to sick days, retirement gratuities, grid advancements, and pensions; and the imposition of unpaid days.

Undeterred, ETT members responded in force to this draconian legislation with continuous political action and protest (from Bill 115’s introduction on August 27, 2012 to the present day). Actions have included: letter writing campaigns; rallies at offices of MPPs, the Board, and the Ministry of Education; the “Pause” campaign throughout the fall, dealing with meetings and other voluntary activities at schools; and culminating in a one day legal strike on December 18, 2012.

So, on January 3, 2013, when former Ontario Education Minister Broten imposed what she continued to call “collective agreements”—a perversion of the term—plans quickly evolved for an ETFO political protest across the entire province on January 11 (four months to day of the passage of Bill 115). But on the day of, with just hours to go, the Ontario Labour Relations Board (OLRB) ruled the action illegal. ETFO members chose to comply with the ruling.

There was an understandable momentary deflation, but rather than wither, resistance intensified! Two things happened in the latter part of January that proves that teachers don’t “turtle.”

Within hours of the OLRB’s ruling, the ETT Executive organized plans to protest that decision at the Ministry of Education building at Bay and Wellesley, on another symbolic date: January 15 (1/15).

In a heartening vision of solidarity hundreds of ETT members, joined by OSSTF and CUPE members, surrounded the entrance to the Ministry of Education building, covering the sidewalk and spilling into the street, effectively closing down traffic.

In late January, with our labour partners, we made our next show of solidarity at the Liberal Leadership Convention (January 25-27). Specifically, the Ontario Federation of Labour (OFL) singled out Saturday, January 26 as an opportunity to send the Ontario Liberals a message, one of strong dissatisfaction and disapproval, from all parts of labour across the province.

Six ETFO GTA locals had also been working to augment the OFL-led protest with one of our own. On the night of Friday, January 25, the Liberals planned to hold a tribute to their departing leader. We organized our own “tribute” to Dalton McGuinty. 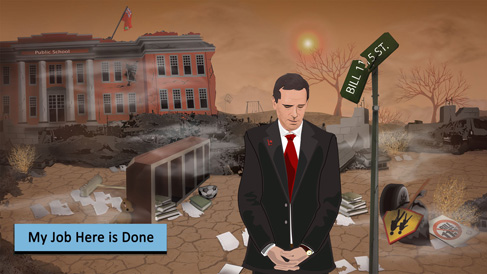 In the week leading up to the convention, we launched an unprecedented digital media campaign across the GTA, inviting education workers and all members of the public to the weekend protests. On Friday evening, more than 4,000 teachers and supporters from across the GTA braved the cold and snow to demonstrate in front of Maple Leaf Gardens. Teachers owned the night! We were the story!

The next day, Saturday, January 26, an estimated 30,000 participants shut down several city blocks around the convention in the OFL-led demonstration, with teachers comprising the vast majority of participants, and ETFO members/supporters clearly identified as the majority of those.

Tweets and news reports opined that the assembled delegates heard and were influenced by the protestors outside and that the outcome, the selection of Kathleen Wynne as Premier, was shaped, in part, by the action of the participants outside of the convention. 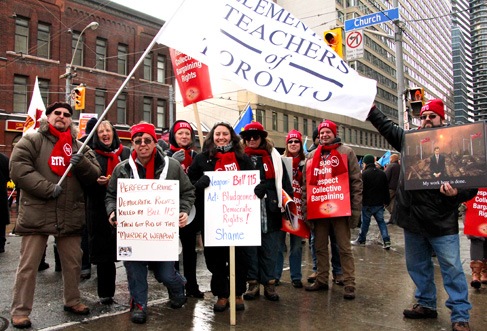 ETT Members at the rally at Maple Leaf Gardens on January 26, 2013.

Dalton McGuinty, the self-professed “Education Premier,” and Minister of Education Laurel Broten needlessly declared war on education workers in Ontario. ETFO/ETT members joined the battle, on point of principle, and were creative, articulate, and firm in their resolve to fight Bill 115.

The final outcome is not yet known.  At this point in time, ETFO has gone through a series of talks stretching over two months, involving at various times, the new Premier, the Minister of Education, and various government representatives. Without concrete proposals of change, ETFO held to its advice to members to not rush back to “business as usual” on some vague assurance to “trust us,” and “things will be better…next time.”

Recently, at the end of March, ETFO suspended its advice to members, to not participate in extra-curricular activities. The choice for participation/resumption of voluntary activities still remains with individual teachers, however. New “conceptual understandings” have emerged, and it is important to remember that they are still part of a larger unfinished package. That information will be shared with members when talks are completed; when an agreement is reached.

Ultimately, the ending may involve a prolonged political struggle. This government remains in a minority position and needs outside support in order to survive. A general election is possible at any point. ETFO’s involvement politically in the next election is a foregone conclusion.

We know that the ETFO-led court challenge is scheduled to begin in October 2013. The resolution of that will likely take several more months after that. Whether that has a bearing on possible election results also remains to be seen.

ETT members can be proud of the role they played in the various rallies, demonstrations, and other actions undertaken to fight this legislation. There are no grandiose awards given for standing up for democratic rights, certainly little of tangible value. But the one item that may yet prove to be a much sought after piece of memorabilia is the button that many ETT members wore, that simply said, “Courage.” 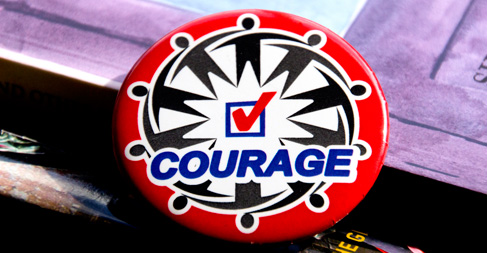