The Canadian Labour Congress, as part of its Together, Fairness Works! campaign, has released the following study to show just how much better the union advantage truly is–both nationally and in 30 communities across the country. The study shows that on average in Canada, unionized workers earn almost $5 more an hour than non-union workers.

Their conclusion: this advantage doesn’t just belong to union members. It benefits everyone! 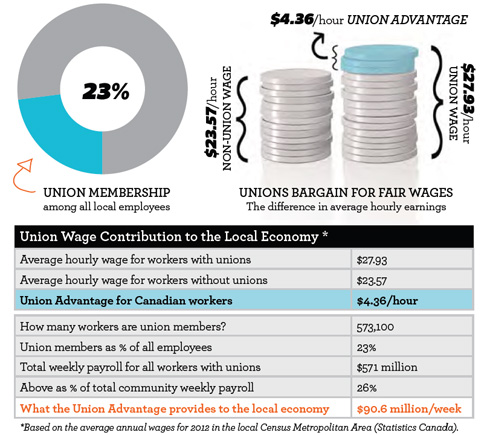 From the Toronto study:

There were 573,100 union members working in and around Toronto in 2012. That’s 23% of all employees. Their weekly payroll of $571 million accounted for 26% of the total for the whole community.

That union advantage translated into more than $90 million every week paid into the local economy to support local businesses and community services.